Rahway's 2022 Mayor's Summer Concert Series will wrap up on Thursday 8/25 at 7:30pm with a free outdoor concert outside of Union County Performing Arts Center.
Unfortunately, Brian McKnight has canceled his scheduled performance due to unforeseen circumstances.
However, because the show must go on, the City is pleased to announce that Grammy-nominated R&B, pop, and gospel singer Ruben Studdard will take the stage. Studdard, who rose to fame as the winner of the second season of American Idol, will pay tribute to the legendary Luther Vandross with his show "Ruben Sings Luther".
In the event of rain, the show will take place inside the theater. 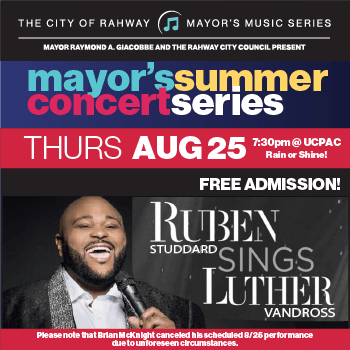 Presenting all genres of music, there is something for everyone!

Hit the streets and get live with house music parties, or relax with friends for local musicians ranging from funk, rock, latin, or jazz sounds. Don't miss the major concerts that will be happening throughout the summer that attract big name acts and large crowds - all in the Arts District of Rahway's downtown.

Complete schedule and acts below: